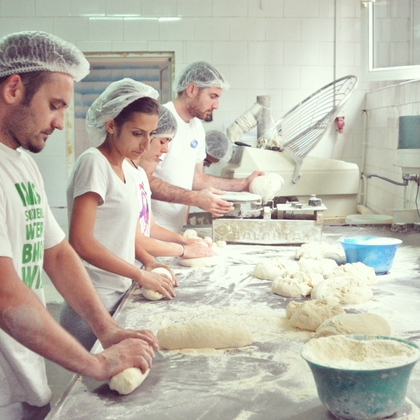 30 youngsters from Technical Energetic High-School and “Raluca Ripan” Technical High-School in Cluj-Napoca have spent their summer holidays working for the first time. Through “Edupractic” project supported by the companies Electrogrup and EnergoBit, the youngsters have worked in local companies, in their domains, and learned working skills from employees with experience, earning their first money. Also, the pupils have learned little business secrets from successful entrepreneurs in Cluj, like Teofil Mureșan, CEO and Founder of Electrogrup, and Ștefan Gadola, Vice-president and Founder of EnregoBit. Moreover, 30 most engaged and motivated pupils of those taking part in the project have been selected for summer internships within local companies.

In 2014, through ”EduPractic” project there have been supported over 44 pupils from technical high-schools in Cluj-Napoca. In the second semester of the school year, the youngsters took part to a career orientation and financial and entrepreneurial education course. At this course, the pupils have identified their professional interests, have learned how to create a good CV, how to be prepared for an interview, which are the proper attitudes at the workplace, but also how to open a small business and how to manage their financial resources.

Thus, in July and August, each of the 30 younsters have worked for a month within Cluj-Napoca companies: Electrogrup, EnergoBit, Bosch România, Panemar and ”Bunica Maria” Bakery. The pupils had their first work contract or paid internship contract and have earned their first salary, 500 lei each.

”During my work experience I learned many useful things: getting accustomed with a morning schedule, being punctual and paying attention, many things which I couldn’t have learned at school. I have practically worked a bit of everything available at the company. The most pleasant moment was when the instructor had confidence in my abilities and let me work at an electric panel without checking me all the time, but I also enjoyed the moment when I saw the electrical cabinet completed.”  (A. B., pupil in 11th grade, Technical Energetic High-School)

“We learned how to model the dough and how to cook it at the right temperature and also learned how to work in a team. The most pleasant moment was when we realized one day that we, the pupils, we worked a full day without any help.” ( M. S., pupil in 11th grade, „Raluca Ripan” Technical High-School)

The project was organized by Danis Foundation with the help of Electrogrup and EnergoBit. Also, have helped in organizing the traineeships and funding the project the following organizations: Cluj Donors Circle, organized by Cluj Community Foundation, Bosch Romania, Panemar, “Bunica Maria” Bakery and IPB. Eductional partenrs in the project were Technical Energetic High-School and “Raluca Ripan” Technical Hig-School.

The cost of the entire program was 52.650 lei, out of which 47.650 were offered by Electrogrup, EnergoBit and Cluj Donors Circle, while the rest of the costs were covered by Bosch Romania and Panemar. The most important expenses of the project were the youngsters’ scholarships and the career orientation and financial and entrepreneurial education course. Also, through the project, the transport or accommodation of the pupils living outside Cluj-Napoca have been covered for a period of one month during the summer holiday.

The „EduPractic” project was initiated in 2012 by Danis Foundation and Electrogrup. In 2014 took place the third edition of this programme which supported 57 pupils throughout 2012 and 2013.