Air conditioning for over 8.000 patients in three hospitals in Cluj 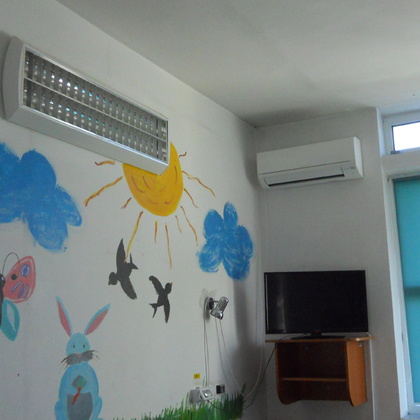 Over 8.000 patients from three hospitals in Cluj-Napoca are benefiting better conditions during summer . Through „Health, out of Generosity” project, entirely financed by Electrogrup, air conditioners have been mounted – with a technology specific to medical accomodations – in  saloons, intensive care rooms and operating units.

The purchase of the air conditioners and installation works were held in April_may 2014. The program included “Prof. Dr. Ion Chiricuţă “CF Cluj Hospital and Children’s Hospital. The entire amount of equipment and the work was 55,000 lei.

At the Oncology Institute were installed 12 air conditioners, including eight devices in eights rooms for children hospitalized in the pediatric ward and four devices in the intensive care unit of the hospital. At the CF Hospital have also been mounted two devices in the intensive care unit and at Children’s Hospital were mounted air conditioners in two operating rooms. The air conditioners in intensive care rooms and in the operating units are special devices that cool and purifies the air while using technology specific to medical premises. These improve the conditions of hospitalization of patients, but also contribute to the smooth conduct of the work of doctors and nurses.

„We didn’t have so far air conditioning in the operating rooms and there were summer days when we would operate at over 30 degrees. Now doctors can focus on the act of operation, not to wipe their sweat.” (Dr. Horaţiu Gocan, senior lecturer at Clinical Children’s Hospital).

According to estimates provided by three hospitals, these air conditioners will benefit over 8,000 patients annually.

The “Health, out of Generosity” project began in 2009 when with the support of the same companies – Electrogrup – TVs and computers were purchased for prolonged inpatient wards in 15 institutions offering medical services in Cluj county. Since then  are also bein paid annual internet and televisio subscriptions for hospitals that have requested this service.

The “Health, out of Generosity” project is part of the Danis Foundation CSR programmes involving companies and their employees in the community.